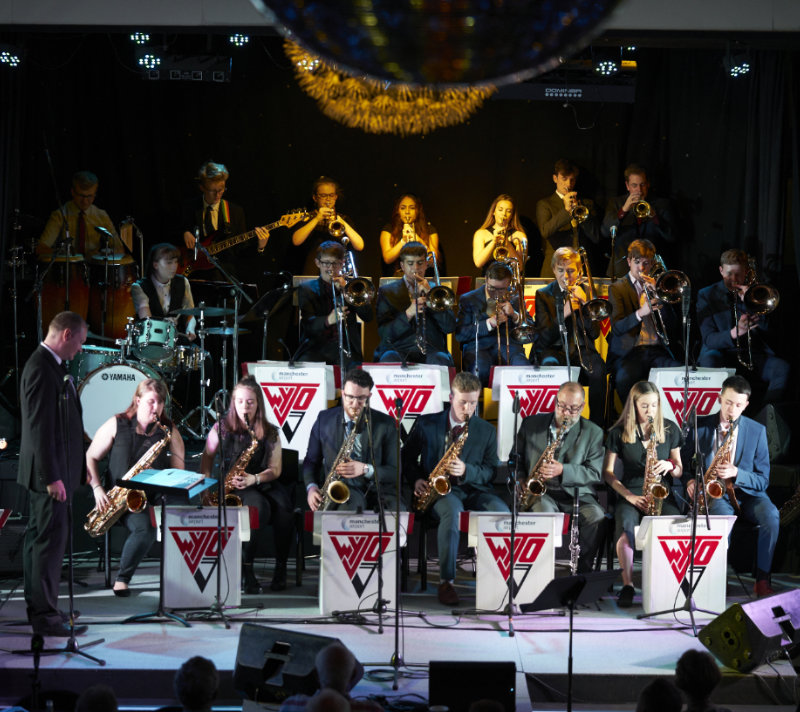 Formed in 1976 by Wigan Metropolitan Borough Council this multi-award winning band aims to train and develop the musical skills of its members through the performance of big band music from 1930’s to the present day. Over the years, WYJO has received many national and international honours, most notably from the BBC Radio Big Band Competition, the Daily Telegraph Young Jazz Competition and the National Festival of Music for Youth. In 2010 they were runners-up in the Great North Big Band Festival at Sunderland University and in 2014 and 2015 were the winners of this prestigious trophy.

As a result of their high standards, the orchestra has worked with a number of the world’s top musicians including Maynard Ferguson, Bobby Shue, James Morrison and many more.

Since 1985 the Orchestra has released ten albums, which have sold to over twenty-five countries and have been played on radio stations throughout the world. The most recent recording features guest soloist Eric Marienthal and was recorded live at Wigan International Jazz Festival in 2016 on the occasion of the band’s 40th anniversary.

Every year brings personnel changes in the orchestra. Many members go on to study at Music Conservatoire and forge careers in the professional music world. Drawing on the work of its training ensembles Wigan Schools Swing Band and Wigan Youth Big Band. there are always new and eager young players waiting in the wings to fill vacancies.

Up until 2011 WYJO was directed by Dr Ian Darrington MBE. Upon Ian’s retirement, former WYJO member and now Wigan’s Head of Music Service David Little has served as the band’s MD.