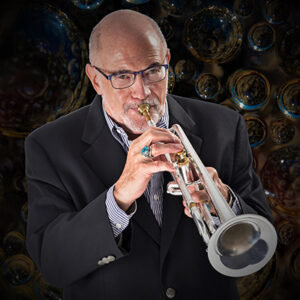 Mike Vax is an American jazz trumpeter, cornetist, big band leader and composer.
Vax played trumpet in the 1970s in the big bands of Stan Kenton and Ellington veteran Clark Terry, with whom he later recorded the album “Creepin’ With Clark” for Summit Records in 2000.

In his career as a band leader, he has recorded about twenty albums, including several albums with the Mike Vax Big Band. In this band, with which he still performs, several of Kenton’s old-timers played and play. Other groups with which he is active include the Stan Kenton Alumni Band, TRPTS (Trumpets), the Great American Jazz Band and several smaller groups.

Vax has played and or recorded with the likes of Freddy Hubbard, Don Ellis, Joe Williams, Anita O’Day, the Four Freshmen, Art Pepper, Gene Krupa, Louie Bellson and orchestras such as the Glenn Miller Orchestra, the Jimmy Dorsey Orchestra and the Dukes. or Dixieland. He also worked with symphony pop orchestras. He has also given many workshops and concerts for pupils and students.